Have you ever had one of those weekends where nothing goes as planned? I just did. Here is how it went.

I had the weekend off.......yippee! We received free tickets to attend the drag races in Grand Bend. We were even lucky enough to get extra tickets so that the boys could each bring a friend along. Believe it our not, I have always want to go to the drag races (is that weird?). Turns out, the boys were not really interested in going, so Monty and I decided to have a 'date' and go ourselves. The weather forecast was not the greatest, but we thought we would chance it and head out anyways. We didn't even make it out of the city when it started to rain. We drove for a bit, neither one of us saying anything to each other, but thinking we should turn back. Eventually I spoke up and we made our way back home. The tickets were good for the whole weekend, but Sunday we planned on going out on the boat. 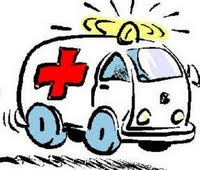 On Saturday evening Monty and I decided to go to the movies (something we never do). We decided on a show, which turned out to be the same movie that Amanda and Jake (her boyfriend) were going to see. We promised to sit on the other side of the theater and pretend we didn't know them. They left a bit before us to get gas in Jake's van.

Monty and I were waiting in line to buy our tickets when we received a phone call from Amanda that they had been in a car accident. My heart skipped many beats and I am not sure how we got to the accident scene. When we arrived the 911 call had already been made and there were fragments of car parts all over the road. The van that Jake was driving had been t-boned and the passenger side was hit very hard. Jake was fine (but very shook up) and Amanda seemed a little confused and complaining about head, neck, shoulder and arm pain. I settled down a bit once I could see that everyone was going to be fine. She was taken by ambulance to Grand River Hospital where we spent the remainder of the night.

While we were there, victims from another bad accident had been brought in. Their injuries were much more serious than Amanda's. It was also a minivan that had been hit....with 4 young children and 2 adults. They were part of a wedding. Before too long then entire wedding party including the bride, groom and parents were there too. My heart went out to them. The bride was still in her dress and the little boys in their tuxes. Some of the injuries were very serious. Although we were not involved, nor did we know any of them, I felt their pain and stress. It was traumatic for Amanda too, as she could not really see what was going on (due to the fact that she was strapped to a board with a neck brace on and couldn't move anything but her eyes) but she could hear everything.

This made our wait very long. Amanda was on the back board for about 4 hours. She was not handling this very well and I had to coach her through many panic attacks until the doctor could be sure there was no real damage to her neck and back. Eventually x-rays were ordered and around 4:30am we headed home to get some rest.

Today she is very stiff and sore. There is swelling in her elbow and she is moving very slowly. She looks much like the girl in this image. Thankfully they are both ok. The van did not fare so well.

We are hoping for a more normal weekend next week without any surprises.
Posted by Carolyn Wolff at 9:47 PM