I love going on an adventure. My dad always planned family hikes when my kids were younger and I loved them. It was always a great adventure. I really enjoy the outdoors and exploring new places.

With Joanne away on holidays, it was an extra busy week. Thanks to my mom, I was able to escape from the store for a few hours on Thursday afternoon. Amanda was away at a cottage, but my boys were around. I told them to get ready to go out......we were going on an adventure. 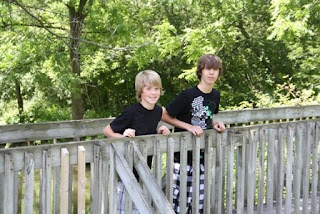 We drove to St. Jacobs and parked down by the old mill. There is a path that goes through the woods and we followed it. Jake (Amanda's boyfriend) told us about this spot and I thought the boys would really like it. 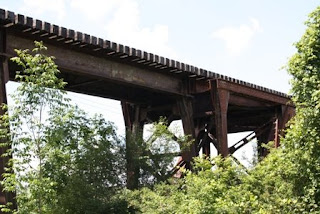 From the path we could see a railway that crossed over 2 rivers. If I knew anything about geography I could tell you which rivers they were, but I don't. 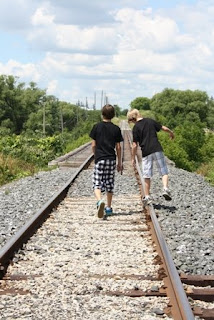 We followed the path and it lead us up to the railway, which I knew it would. The boys were more than happy to explore. Both of them thought this was really 'cool', and I was the very 'cool' mom that was taking them there.....do you see where this is leading? 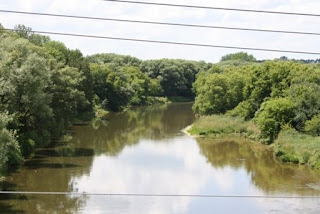 This is the view from the railway over one of those rivers. We were as high as the wires (not sure what they do) and the view was spectacular. As the boys discussed all the very 'cool' things about sitting this high on a railway track over a flowing river, I quietly sat a listened. 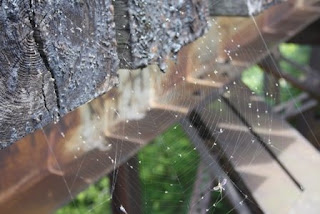 I am not a fan of spiders, but I did think that this was a 'cool' photo. While I was trying to get the perfect photo of this entangled web, the boys thought they should backtrack a bit and collect some rocks that they could toss into the water below. 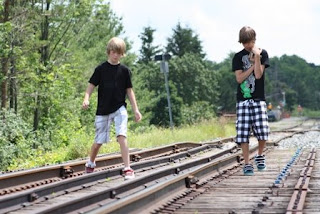 Matt (on the left) has his pockets full and Jason (on the right) had to carry his collection. If he loaded his pockets, his shorts would be at his ankles. Matt pointed out that fashion is not always practical. 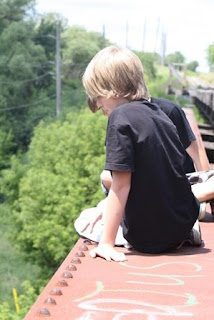 In a matter of minutes they had dropped all of their stones into the river below. They continued to discuss how 'cool' this adventure was. Yeah me! I sat quietly listening and snapping photos. While listening, I heard a train whistle off in the distance. It didn't register right away, but we were sitting on railway tracks, above 2 rivers........as this was sinking in, Jason looked up and said 'mom, is that a train?'

We jumped up (but not too quick) and briskly made our way off the tracks to safety! Please note that at no time were we in any real danger because there was a place to stand if a train did happen to pass. 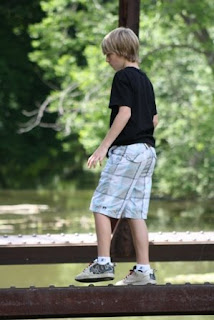 We made our way back down to the path and the train still had not appeared. The boys then decided they would scale the railway structure (which was above the 2 rivers) and I quietly watched and took photos. The river below this beam was about 12 inches deep but very scummy. Matt is not much of a risk taker. It was nice to see him going out on a limb (or beam) and try to follow along with is big brother (even if the river was only 1 ft deep). We continued down the path and snapped a few more photos on the way. We heard the train whistle again, but this time it sounded much closer. 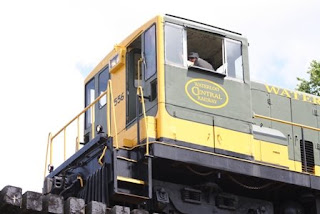 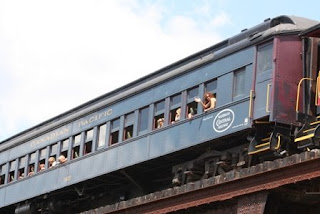 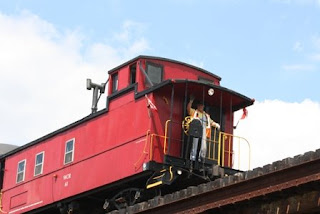 We ran back to the railway tracks and to our surprise it was the St. Jacob's train! I realize now why it took so long to arrive......it goes very, very, very slow! 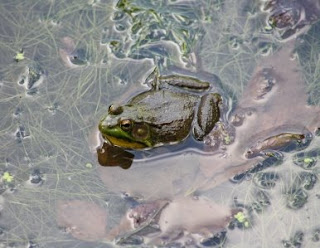 The adventure was coming to an end and we were heading back to the car when Matt discovered a frog in the river. He named him Phil. A little bit further down he found another frog that he named Philip.....do you see a pattern. 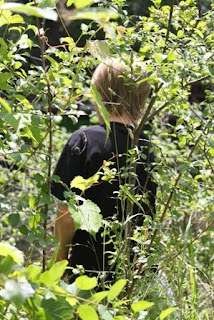 Here is one of my favourite photos of the day. Matt is trying to catch one of the frogs (I can't remember if it was Phil or Philip).

This is an adventure I won't forget any time soon. As the boys get older, we don't have as many adventures, so each one is a gift. I managed to be 'cool' for the afternoon and I think they had as much fun as I did. I hope we do it again soon.
Posted by Carolyn Wolff at 11:41 PM