Just like Santa coming every Christmas, we have a hockey tournament every Christmas too! Jason is a goalie and I took my camera to one of his games and took some shots. Unlike other players, Jason doesn't move around the ice, so it is a little harder to get photos of him. I managed to get a few using my super zoom lens.

This is my favourite stance! 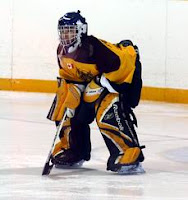 How do you like my new blog header! I love it. My best blogger friend designed it for me tonight. I sent her a photo that I took of the marshmallow snowmen in our Christmas tree. My daughter made them for a project at school and then shoved them in the tree. I turned out so well that I thought it would make a great photo form my header.

My blogger friend worked her magic and voila! She makes it seem so easy, but I know that a lot of work is involved. I am truly grateful for her help. I hope you enjoy it as much as I will.
Posted by Carolyn Wolff at 11:32 PM 2 comments:

I Have Been Tagged!

My blog buddy, Karan, tagged me on her blog. That means that I have to list 7 random facts about myself. This is going to be tricky!

On Saturday night Joanne, Janet, Karan and I all did a Christmas cookie exchange. Part of the requirement was to photograph the baking of the cookies and blog them. This was so fun to do! My friends have already posted alot of their photos (which makes me very unhappy that I wasn't the first) so I thought that I should get some of my photos up on my blog.

This is just a really quick post and I will follow with the recipe and the rest of my photos when I have more time. 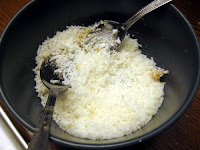 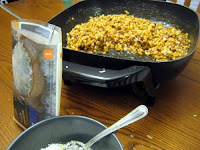 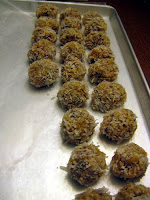 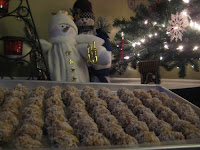 In the meantime you should check out these blogs: Karan's, Joanne's, and Janet's!
Posted by Carolyn Wolff at 9:41 AM 1 comment: 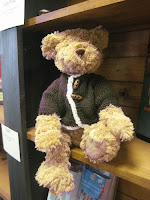 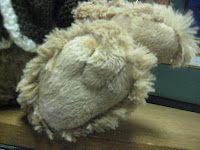 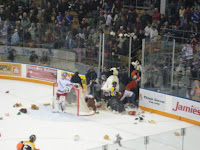 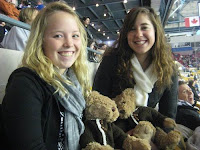 I did take a video of the collection process. I tried to upload it, but I had technical difficulties (that means that I don't know what I am doing). As soon as I figure it out, I will post it for you to view.
Posted by Carolyn Wolff at 9:11 PM 2 comments:

Well, I had the weekend off so in between hockey games I thought that I should cook a real meal for a change. I am always so busy with the store and running the kids here and there that we don't have meals like we used to. Don't get me wrong, we do eat healthy, but I just don't feel like I put as much effort into it as I used to. 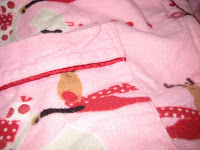 I have been craving chicken pot pie and my neighbour gave me a recipe that I have made a few times and it is great. It does require a little work, which is why I don't make it often, but it is worth it. It is also great for leftovers, which I plan to have a few times this week.

So while I was still in my jammies (I am just showing you a shot of the jammies, not the whole me) I began cooking so all I would have to do is pop it in the oven closer to dinner and fill the house with the smell of home cooking! 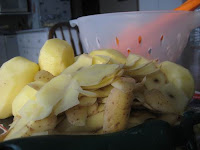 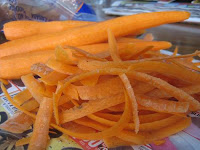 To start, I peeled some potatoes and some carrots. The recipe calls for 3 medium sized potatoes and 3 carrots. I love both of these veggies, so I put in extra! 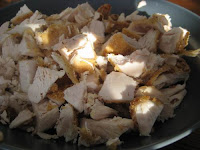 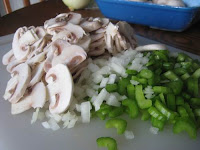 The recipe also calls for chopped up onion, celery, mushrooms and chicken. On Friday night Amanda cooked up some chicken breasts and nobody showed up for dinner. I just cut up the cooked chicken and it worked out perfectly! 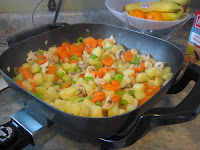 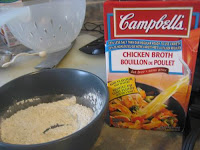 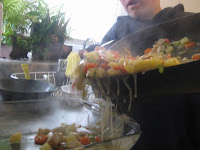 Once it was thickened I poured it into a baking dish and topped it with Bisquick biscuits and baked it until they were golden brown and the mixture was bubbling. 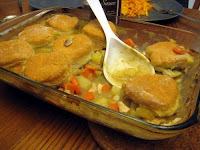 My family was so anxious to eat it, I didn't even get my final photo before some was missing.

So, I challenge you to try this recipe. Make it in your jammies! I think it tastes better.

In an electric frying pan, melt butter or margarine. On medium-high heat simmer the carrots, potatoes, onion, celery and mushrooms until tender. Add the flour, thyme, salt and pepper to coat the veggies. Add the chicken stock and simmer until slightly thickened. Pour into baking dish and top with Bisquick biscuits and bake at 350 degrees until biscuits are golden brown and mixture is bubbling.