Saturday was my youngest sister's birthday and she wanted to go bowling. After dinner we headed over to the Frederick Bowling Lanes to knock over a few pins with my family. My sister and her boyfriend Kevin, my mom and dad, my other sister Tracy and her daughter Payton, Amanda, Jason, Matt and myself made up the team! (my hubby was unable to attend due to his knee issues. We encouraged him to come along, but he decided to stay home and watch the Leaf game on TV). 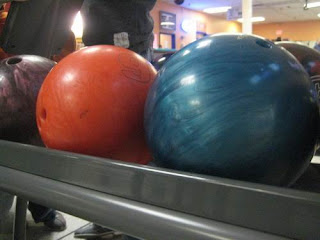 So when we first arrived we all decided on which ball we wanted. I went with a 10lb orange one, Jason had a hard time finding one that would fit his fingers, so he decided to share mine and Matt had and 8lb blue one. The first photos I took were of the balls in the rack......they look good, eh? 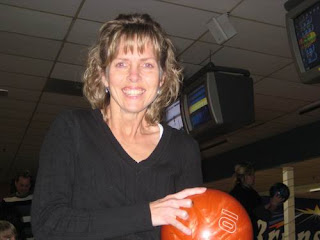 Payton, who is only 7, wanted to take some photos with my camera and she got this shot of me just before my first turn. Not bad for a little person. This is a photo of Matt in action. He was struggling a bit, but he still enjoyed himself. You will notice he is also using my lucky 10lb orange ball. 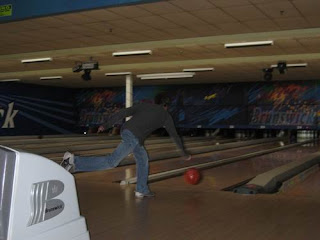 And here is Jason. He probably had the most fun out of everyone in attendance. It didn't matter if the ball when in the gutter or he got a strike, he was happy. Funny enough, he lives his life the same way. Lucky guy! 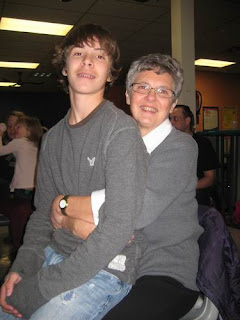 Because there was a large group of us, we were always fighting for a seat when it wasn't our turn. Jason took my mom's seat when she went up to bowl and when she returned she made him give it up, so he just sat on her lap. That doesn't happen too often, so I was sure to grab a photo. Later in the evening Matt was sitting on her knee as well, but I didn't have my camera handy, so I missed it.

Amanda was coming down with a cold and didn't actually bowl. She was present, but I didn't seem to get any good shots of her. Oh well, maybe next time. 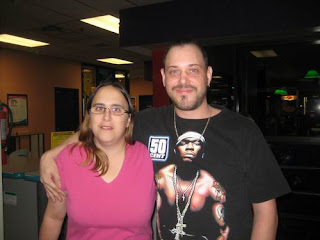 Happy 30th birthday Marie! I hope you had a great time.
Posted by Carolyn Wolff at 8:56 PM