Getting Ready For A Halloween Party!

Halloween is quickly approaching and my youngest son, Matthew, has always enjoyed the festivities. Don't get me wrong, Amanda and Jason also enjoy it, but Matthew has always put a lot of thought into what he was going to dress up as.

Amanda has always been more interested in shopping for Halloween.....for decorations, candy, baking and making crafts. Even as a little girl she would get out her craft supplies and have the boys making ghosts and pumpkins to stick to the front window of the house. This year she showed the boys how to make a special 'goop' that she learned to make at school. She is also planning to make spooky cupcakes to take to one of her classes this week. She is going to make a great mom someday!

Jason has always gone along with everything, but I don't think he cares much. His plan this year was to head over to a friends house and watch scary movies. Considering he can't even sit through CSI or our new favourite show 'The Fringe', I don't know how he expects to get through something like Friday the 13th or The Saw. Today the plans changed and now he is going out and needed to dress up like Batman. A bunch of them are going out as superheros! We headed out to the mall and he is set to go!

Now, back to Matthew! He went through many different ideas and finally came up with Mario from the video game. I am not sure where that came from, but who am I to question this. I happened to be driving by a costume store on Thursday so I stopped in to see what they had. I found a hat and mustache that I thought would work. I didn't dare buy it without checking with Matt first, and he thought it would be better to come with me and see for himself.

On Friday I met up with Matt and Monty (my hubby) and as soon as he entered the store he didn't want to be Mario anymore. There were lots of costumes to choose from and after what seemed like hours he finally chose one. He wanted to be a clown. They have these new costumes that have a fan inside and when you turn it on, they inflate. I was a little hesitant, but we took the plunge. He was thrilled.

On Saturday he gathered up a few things from home to add the finishing touches. He had a big Halloween party at a friends that night. His sister helped him with his makeup and he looked great. The past few years he has won the prize for best costume and we thought he had a great shot at it again.

Here are a few shots of him getting ready. I am so glad that he has so much fun with this. 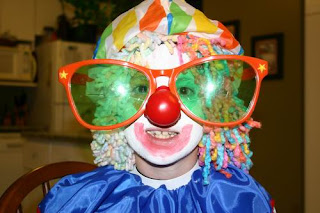 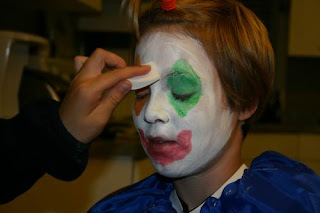 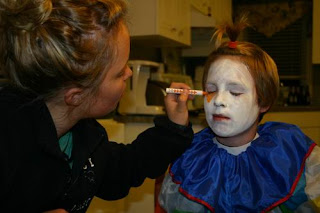 He was a little late arriving to the party so I thought I should take him up to the door. I just happened to have my camera in my hand and invited myself in to see if I could get a photo or two. Matt gave me 'the look' and I just ignored him. We were greeted by the hosts (very scary looking couple) and they took me downstairs to the party. The kids were very excited to see Matt and myself. They gladly posed for a group shot. I also got a shot of the punch with the frozen hands for ice. Gross! 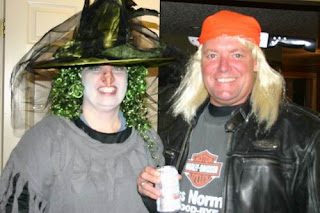 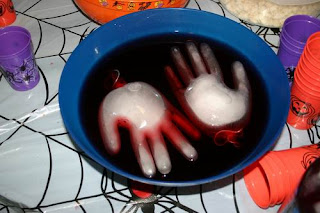 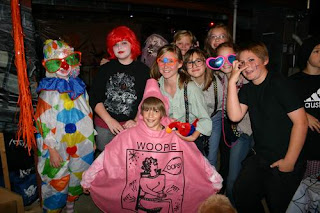 Matt ended up winning the 'cutest' costume and arrived home with a very large tub of Double Bubble. He was thrilled. I am so glad that he enjoys this season. Happy Halloween everyone!
Posted by Carolyn Wolff at 9:03 PM